LITERAL:
SoundAds is a telephonic advertising campaign where people, in contrast to traditional advertising, have to pay to get full access to the ad.
The campaign – which resembles the service you sometimes find at selected cultural landmarks – consists of a series of intriguing images that are tagged with a 0900 number, meaning that you have to pay via your phone bill to get the audible dimension of the ad.

The visual ads are made by Dutch photographers and illustrators and printed on posters, postcards and in publications. The audio-layer that comes with each ad, offers a short narrative story and/or sound composition that compliments the image.

The campaign was running in various Dutch media during March 2005 but if you missed it, you can see and listen to the ads (for free) at the SoundAds website. 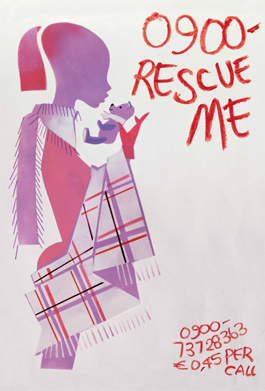