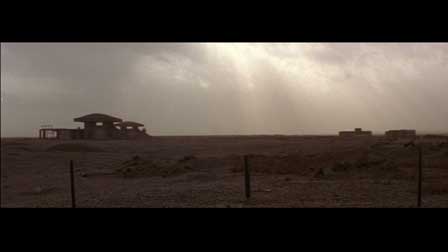 Cobra Mist explores the relationship between the landscape of Orford Ness and the traces of its military history, particularly the experiments in radar and the extraordinary architecture of the Atomic Weapons Research Establishment. Much of what took place there is still under the official secrets act so will only be revealed over time. The buildings have been left to the elements to deteriorate, creating a tension between the time it will take for their secrets to come out and for the buildings to disappear. The place has a sinister atmosphere, which the architecture itself begins to reveal or hint at. The film records the physical traces of it’s often secretive past using the photographic nature of 16mm film and time lapse to construct an impossible experience of the landscape and expose its history to the camera.

The soundtrack is composed by Benedict Drew from sound recordings taken from Orford Ness by Chris Watson. Chris made recordings out on the Ness and in some of the buildings using very high sensitivity microphones to capture sounds such as the birds bursting out of the old vents that they are now nesting in, dripping water coming through the open roofs, the gulls alarm calls, the faint whisper of the world service from the masts in the aerial field and the sound of the sea in the shingle to capture the atmosphere of the place. These recordings were then used by Benedict to compose the soundtrack that conveys the sense of foreboding that is present in this landscape and its architecture.

Cobra Mist was an Animate Projects commission broadcast on Channel 4 in September 2008 and screened at Aurora Festival, Norwich in November 2008.

A DVD compilation of films published with LUX was released autumn 2008.