The final sequences of “Spider Web Castle” : inside the castle, Lady Washizu (aka lady Macbeth) persistently washes her imaginary bloody hands while Lord Washizu (aka Macbeth) catches thousands of arrows launched by his own archers in a spectacular showdown; outside the castle, the SpiderWeb forest, the oppositional force in camouflage, advance towards the castle. “How can a forest move? It must be a vision.” Lord Washizu utters in frenzy as he recalls the prediction from the witch in the forest – “You will never lose a single battle, unless the Spider Web forest begin to move and approach the castle.” The drama unfolded are tales of greed, ambition, betrayal, revenge, rebellion, and civil resistance.

Moving Forest reinvents a modern edition of a Castle Central and a city in revolt. Inside the castle, the downfall of the assumed power; outside in the city, the mobilized urbanites march with generated sounds of insurgence towards the imaginary Central. Moving Forest plans to collaborate with sound artists to compose acts and scores, at the same time, drafts a PD (pure data) conspiracy scheme, performing live with citywide wifi transmitted intervention.

The opposition is AMONG us.

The central is AMONG us.

Urban Jungle. Digital Forest. Multitude. Age of Empire. Liquid Architecture. Flash Mob. Swarm manoeuver. Urban warfare. Moving Forest locatess itself at any given decayed urbanscape and plots an urban renewal with DIY take over. The SpiderWeb forest is now the DeepWeb forest of social networked space – both virtual and urban. Inside the castle, a revolt manifested by arrow downpour; outside the castle, the resistance on the move with electronic branches. Each camouflaged tree branch is now a self-powered transmitter with its stick-out antenna. The long march towards the imaginary castle maps the city’s public wifi airspace. Revolt and insurgency from within and out orchestrates a sonic performance with multiple sound input/output – code/de/code. 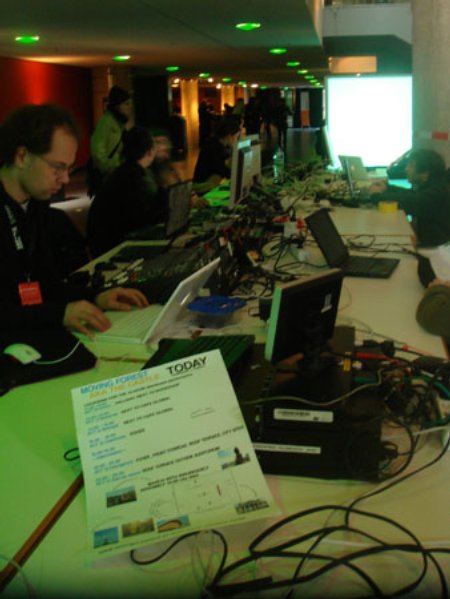 ** Coders working on the Moving Forest, the experimental project by Shu Lea Cheang.