initiated by musician and producer jochem paap, umfeld.tv aims to provide a patform for audiovisual surround sound productions. our current project, also called umfeld, is the first dvdv release through this platform. in addition, umfeld is also available for free in various downlodoable formats. the free versions are licensed under a creative commons licence which means they may be shared and distributed in hteir unaltered formats, however any form of commercial use is not allowed without permission. both the dvd and the free versions are available in our online store.

Umfeld is an audiovisual production created in HD with audio meticulously composed for 5.1 surround. The piece is an intense sensory expedition that takes the audience through eight chapters comprising a drama drawing on the dynamic arc of a feature film, but consisting of highly abstract sounds and images. Soundscapes modulate rhythmically from intense an subtle to assertive and thundering, always using the surround audio environment to its full potential. In synchronicity with the sound, the images move through an array of contrasting worlds ranging from cold organic black and white synthetic animation to boldly colorful angular compositions with their roots in imagery captured in the old industrial harbor of Papp´s hometown of Rotterdam. Together the exploration of sound an image build upon each other creating and examining detailed worlds of composition and form with a deep embedded desire to forge a progressive approach to the worlds of sound and cinema. 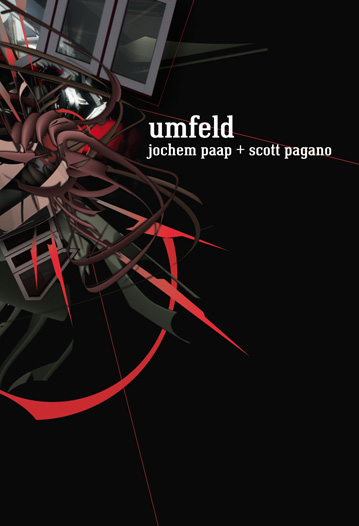