// CALL FOR ENTRIES
Show your identity!

The motto of the 2008 festival is IDENTITY, reflected in film programmes, lectures and specials. Positioning by the media and artistic self-definitions will be pursued; individual, social and global identities in a rapidly changing world will be explored and queried according to subjective and scientific ocalisations.

The EMAF is one of the most influential forums of international Media Art. As a meeting point for artists, curators, lenders, gallery owners and an audience of specialists, the festival has had a great impact on the topic and aesthetics of Media Art. Each year the festival offers its visitors a current overview of experimental films, installations, performances, digital formats and hybrid forms, ranging from personal and political subjects or formal experiments to provocative statements.

At the festival an international jury will present the >EMAF Award< for a trend-setting work in Media Art and the >Dialogpreis< of the German Ministry of Foreign Affairs for the promotion of intercultural exchange. Furthermore, the jury of the German Federal Association of Film Journalists will award the prize for the best German experimental film. // CINEMA
Experimental shorts and feature films, music videos, new forms of narration and documentation as well as specials

// EXHIBITION
The latest installations from 23 April to 25 May 2008 in the Kunsthalle Dominikanerkirche. We are looking for new installation works which express the current field of media arts. One of the festival’s exhibition will present the issue of “Youth and Identity”. What we are asking for in this section are artistic stances on and glimpses of adolescent realities from a variety of regions and cultures.

// INTERNATIONAL STUDENT FORUM
The contact and project exchange for new projects, tendencies and training concepts from the media universities, academies of art and design colleges of Europe.

// CONGRESS
Discussions and issues covering the various elements of the festival in talks, workshops, artist presentations and panel discussions.

We warmly invite you to discover identities and the fascination of the experimental with us in April 2008. 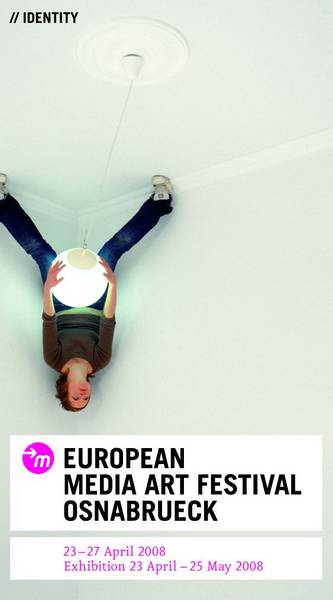