Since we started the label Nonvisualobjects two years ago, many collaborations with artists worldwide have arisen, a large, growing network has evolved and an extensive body of work has been formed that we would like to explore and try to sum up. The book developed from the idea of presenting an extract of artists involved in the current experimental electro-acoustic music scene, often following a rather reduced approach in their work. We would like to present artists that work in different areas in this field of electro-acoustic music, to cover a large spectrum even in this quite specific area.

With essays, interviews, photos, drawings and other materials presented in this book, we try to look at the motivation and intention behind the sound prodution from different perspectives, to possibly allow for a new/extended approach to this form of music. Many of the artists involved in this project do not exclusively work with sound, but also in other artistic disciplines. In this book we would like to present these other sides of their work to allow crossreferences/crosslinks to open up new aspects of the music.

The chapters consist of collage-like contributions. Images and text should not necessarily be regarded as complete units, but are open to various prossibilities of interpretation.

It was not our intention to present a discourse in theories of art and music. It was also not our wish to present a curated work on a specific topic. Instead we wanted show very personal portraits created by the artists themselves, which describe their way of working, the methodology of their sound production and which also portray the artist´s physical and not only their intellectual environment – where one lives, things of everyday life, things of interest and inspiration.

In the fast moving times of the digital era, it was also our wish to, at least partly, hold on to an analogue medium. Should the inevitable decay of digitally stored media ever lead to the disappearance of much of contemporary art and culture, the possibility to refer to this book would still remain. 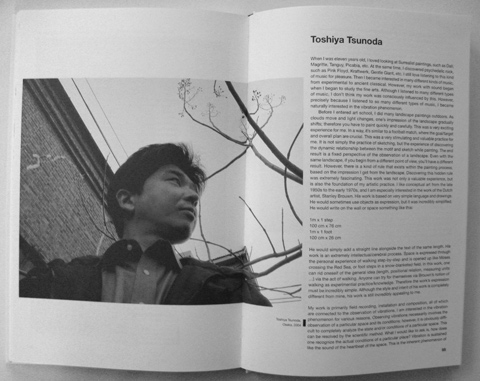