ABOUT:
Interactive Surround Sound Cube (ISS Cube)The ISS cube is a surround sound mixer that tracks the position of several physical objects on a tabletop surface to provide the user with an intuitive way of creating a non-linear soundscape. Sounds of different categories can be added, combined and positioned in space by simply moving these objects. The sound space is provided by four surrounding speakers.

Each object functions individually and simultaneously to modify the volume and position of different sound sources. With common audio mixing consoles and systems this would however not be possible as each sound source is usually mixed one after the other. The limitation is due to the nature of the input devices: joysticks on surround consoles and single mouse input on software systems.

Sound has a substatial impact on our mood. The users of the system can easily change their mood by recreating their spatial sound scenary. For example, nature sounds can be positioned within the space to create a calm and natural environment. To evoke the ambience of a forest, one could have a waterfall in one corner of the room, birds singing in another and the wind whistling through trees.

The low-tech appearance- a wooden box with a glass surface- allows the cube to fit easily into a living environment, as if it were a piece of furniture.

Due to the multiple input devices, the square tabletop display, which enables equal access from all sides, invites collaborative interaction.

The project was shown on several occasions, including the Cybersonica Festival and the Bafta Interactive Festival. 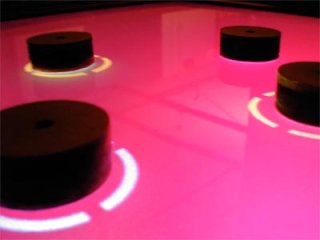