Soundscape-fm : Berlin is a collaborative soundwork in the city of Berlin from 4-8 of February 2005. Inspired by the successful Soundscape FM project, which took place during the Garage Festival in Stralsund of this year, it takes the form of a FM radio broadcast and a user-uploadable database with field recordings taken from the city of Berlin.

During four days, sound artists, amateur sound hunters, phonographers, among other interested participants, will collaborate on gathering sounds from different places within the city of Berlin. A physical workspace, located in the Haus der Kulturen der Welt, will be a post-production booth for the gathered sounds which can be uploaded immediately in a database system. The uploaded sounds are accessible online via an interactive sound map of the city, and will be broadcasted via several local FM radio stations in Berlin during the Festival. 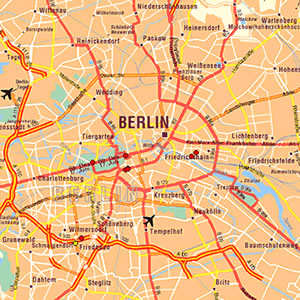