One11 (1992)
a film without subject by John Cage, produced and directed by Henning Lohner

John Cage created his only feature-length film in the year he died. A sublime performance for camera person and light, One11 is a film without subject, in black and white. There is light but no persons, no things, no ideas about repetition and variation. The final impression is of another, timeless place – freely roaming the clouds or, perhaps, under the sea. Chance operations were used with respect to the lighting, camera shots and the editing of the film. The light environment was designed and programmed by John Cage and Andrew Culver. The orchestral work 103 musically accompanies One11. Like the film, 103 is 90-minutes long, divided into seventeen parts – its density varies from solos, duos, trios to full orchestral tuttis.

Cage started to address the perception of emptiness and at the same time the random quality of what happens in a prescribed space as early as 1952 in his piece 4:33, which consisted entirely of silence. Forty years later he said: “Of course the film will be about the effect of light in an empty space. But no space is actually empty and the light will show what is in it. And all this space and all this light will be controlled by random operations.”

This simple concept was implemented professionally and with a great deal of technical input in a Munich television studio under the direction of Henning Lohner.

The film One11 and the musical piece (“soundtrack”) 103 are of the same duration and run in parallel, without relating directly to each other, but each has 17 parts. Each of the parts is based on approx. 1200 random operations devised by a computer and determining how the lighting is controlled and the movements of a crane-mounted camera.

The result, aided by the distinguished cameraman Van Theodore Carlson, is a film entirely without plot or actors, which Cage hopes will enable viewers to find themselves.

Two distinct soundtracks are offered of 103 for large orchestra to accompany the film: one taken from the premiere of the piece by the prestigious WDR Symphony Orchestra of the German Radio in Cologne, the other by the Spoleto Festival Orchestra.

This release marks the first in a series of Henning Lohner’s films to be released on Mode Records, including additional films on Cage. 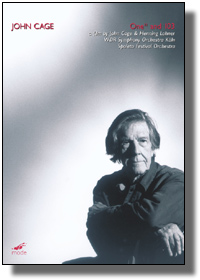