are a collection of abandoned and reconstructed Childrens electronic toys, conducted by a selection of musicians.
As a solo artist Brian Duffy has been performing, lecturing, and demonstrating the Modified Toy Orchestra and the philosophical implications of his experiments for six years.
This year sees a new incarnation of the orchestra. Wishing to expand the live potential of the orchestra, Brian has formed a six piece band to accompany him in the process of performing and writing. He is now joined by Laurence Hunt (Pram), Darren Joyce (Dreams of Tall Buildings), Mike Johnston (Plone, Mike in Mono), Michael Valentine West (Twiggy and the K-Mesons), and Chris Plant (Colour Burst). Together they have performed to packed houses and critical acclaim, for instance, at the 2006 Sonar festival in Barcelona and Supersonic festival in the UK. Previous performances have included the Royal Institute, and supporting bands as diverse as Heaven 17 and Melt Banana. Live sets have also been transmitted on Resonance FM and BBC Radio. 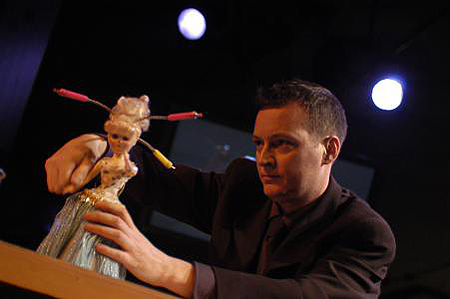