UbuWeb is pleased to announce the relaunch of the AVI’s, RealVideo and MP3s of Robert Ashley’s Music with Roots in the Aether, a seminal series of interviews and performances conceived and realized by Robert Ashley in 1976, consisting of 14 hours worth of video and audio. Subjects and performers include: David Behrman, Philip Glass, Alvin Lucier, Gordon Mumma, Pauline Oliveros, Terry Riley, and Robert Ashley. Robert Ashley says: Music with Roots in the Aether is a series of interviews with seven composers who seemed to me when I conceived the piece-and who still seem to me twenty-five years later-to be among the most important, influential and active members of the so-called avant-garde movement in American music, a movement that had its origins in the work of and in the stories about composers who started hearing things in a new way at least fifty years ago.” 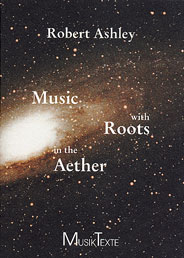