The project consists of two embodiments: a society of sonic devices distributed in a room and a mechanism for recording and reviewing the history of the population. It is hoped that the collective behaviours of the devices will be affected by the way that the room is occupied (by people or other mobile objects) and, as such, the room will develop a “perception” of its occupancy. One might say that the society of devices together function as a “people sensor”, though there are no “people sensing” functions built into the individual devices.

Drawing on the work of Gordon Pask, Donald Hebb and Andrew Adamatzky, the project is an architectural experiment to investigate how one might construct an interactive environment that builds up an internal representation of its occupants through a network of autonomous but communicative sensors.

The “society” of sonic devices

The “society” of sonic devices are distributed regularly but directed randomly in the space. They function like simple neurons, cascading during high activity, altering their thresholds during periods of low activity and becoming apparently “bored” by repetitive inputs. Inputs and outputs consist of high frequency sound, 14KHz to 16KHz, near the upper limit of human hearing; this is necessary to improve the directionality of the sound. The devices are constructed chiefly from analog components and therefore are not “programmed” in the conventional sense to exhibit particular properties. When they have received sufficient input energy (which depends on their particular input state at the time) they themselves “fire”, with a continuous sound of varying frequency.

Entering the space people experience a constantly shifting environment of sound; the individual frequencies employed by each device are particular to that device and they are inconsistent throughout the population; they each vary as they each strive to find their own equilibria. By moving his/her head a person can hear varying maxima and minima of the acoustic waves as the sound outputs produce tartini tones and constructive and destructive interference patterns; but this movement also disrupts the direct transmission of sound from one device to the other and affects the way that they relate to one another. […] 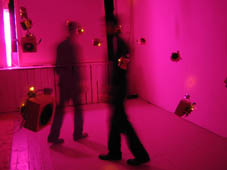