Literal:
Six String Sonics is the (work in progress I believe) creation of Gil Kuno. This project sets out to reinvent the guitar. “Instead of stringing one guitar with 6 strings, we have created 6 single string guitars which will be played by 6 people. Since there will be 6 hands manning the strings, the group is capable of reaching many more chords and melodies.”

The guitarists sit on a 5 meter frame structure. Two bassists play a 2.5 meter bass situated at the top of the structure. The longer bass strings will give the instrument a much deeper tone than a conventional bass. A percussionist will be triggering drum samples at the bottom of the ladder.

I’m sure many musicians would disagree with “guitar compositions have come to sound very similar to each other”, but nether the less, I like the idea behind it and the project is an interesting spin on group collaborative performance. 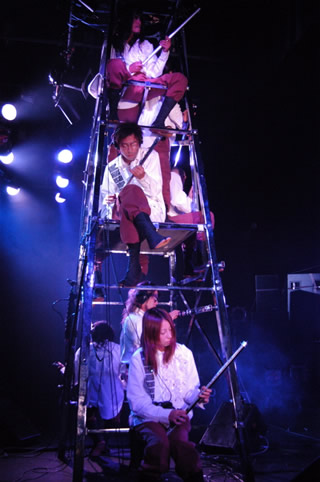