Sonic Acts XII takes place between 21 – 24 February 2008 in Amsterdam. The twelfth edition of this festival is devoted to The Cinematic Experience and includes an international conference, a wide range of concerts and performances, an exhibition and a diverse programme of films. The 2008 edition promises a comprehensive overview of the cinematic experience. Recent technological developments in digitalisation, higher-definition imagary and sound, ever-faster communication networks and new types of portable video players make it necessary to re-address the question of what cinema actually is. Developments such as experiential spaces, immersion and sublimation in contemporary music and visual arts add to the urgency of this question.

Long before celluloid was introduced at the end of the nineteenth century, other media were used to create cinematic experiences: magic lanterns, colour organs, zoëtropes, phenakistoscopes and many other, often optical machines. But even after the introduction of celluloid and the rise of cinema as a spatial concept, there were many attempts to redefine the concept of cinema. This was driven by avant-garde filmmakers during the interbellum, such as Walter Ruttmann and Oskar Fischinger; Jordan Belson and Henry Jacobs in the 50s with their Vortex concerts and Le Corbusier’s Philips Pavilion at the World Expo in 1958 by Xenakis and Varèse; and in the 60s by experiments such as computer and film pioneer Stan Vanderbeek’s Movie Drome project. In the 80s and 90s an increasing number of artists, filmmakers, musicians and composers created all kinds of immersive environments in which they experimented with new forms of cinema.

The programme will focus on the rich history of the cinematic experience. Both the conference and festival contemplate and shed light on how the future of cinema has been perceived throughout history and why a lot of the ideas and attempts of the avant-garde never succeeded or survived. There will be opportunities for speculation on how film would have developed without cinema and answers will be sought both in artistic practice and from scientific perspectives.

Sonic Acts XII will also look into the future of the cinematic experience. Will celluloid be at the forefront of the cinema of the future? Will cinema free itself from the representational narrative? And what will be the role of phenomena such as sensory overload in future cinema?

Also central will be developments in music, visual and media arts in creating cinematic environments outside of cinema’s historic conventions. Instead of looking at the medium as a means of conveying content or narrative, we will examine it as a physical and psychological audiovisual tool that makes us aware of our sensory system and investigate how we synthesise audiovisual stimuli into a comprehensive interpretation of our environment. 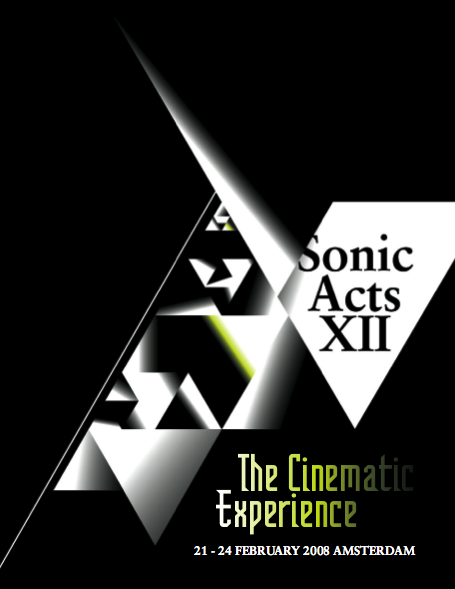