“La Scatola” explores the notion of confinement using multiple approaches. Working on the border zone between the ‘I’ and the outside world, ‘La Scatola’ (“The Box”, in English) can be thought as a narrative device, that represents a diffuse space between the “inside” and the outside”, between the “I” and the “other”, in which multiple and sometimes opposite strength lines are present: sensitive manifestations of the incarcerated and/or protected body, distorted visions of the external world, anxiety, wishes and memories. We may define this zone in purely spatial terms (“forbidden zone”, “abyss”, “barrier”) but also in terms of bidirectional “energy fluxes” created by the sensorial and emotional projection of the incarcerated individuality into the outside world (pain, desire, resistance, impotence, etc.) and by the representation (idealized, distorted, diffuse) of the outside world in the mind and body of the incarcerated individual.

The several narrative devices are organized in order to create enigmatic situations, between the familiar and the weird (or distant). The images or objects to be used, in its simplicity and depuration, can be transformed in a mirror capable of facing the audience with their own memories and individual experiences.

19 to 22 February 08, from 5.00 p.m. until 9.00 p.m.
Manuela Barile and Rui Costa
Workshop “La Scatola: The Amplified Expression of the Body”
MUSAC – Contemporary Art Museum of León (Spain)
Applications to be received until 19 February 08
http://www.musac.es 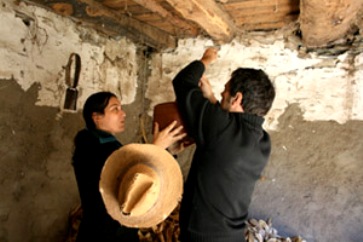