An evolving, resonating journey through splintering landscapes and mysterious characters. Abstractions and forms are reverberated in fragile soundscapes of chaotic planes and unsettling arrhythmic patterns. Is it film or an improvised VJ cut-up? Is it visualized music feeding back into images, or images generating music? Synchronized sinking as SYNKEN is Transforma and O.S.T.’s collective creative experience. SYNKEN pushes the limitations and restrictions of genres and steps across new ground in digital art.

With a mix of abstract images, graphic animation, digital image effects and complex film sequences, SYNKEN creates a fantastically spaced out, darkly romantic image-world. Forests filled with distorted organic forms are contrasted against an architectural abyss, as strange and fantastic characters try to make sense of their surroundings. A mysterious vagabond works as a medium between these parallel worlds, transporting artefacts that become recurring symbols in the dual system and means of communication between the creatures which inhabit them.

Produced in parallel to the images, O.S.T.‘s arrhythmic crackling electronic 5.1 surround soundtrack bathes the images in an eerily hypnotic flow. As sound and image merge and fall apart again over time, they form a synergy that opens up subtle leads which can never be read only as linear. As plot fragments refract and reoccur, SYNKEN continuously confronts the viewer with a modular narrative that can be potentially combined to create any number of interpretations. in the live performance version, Transforma and O.S.T.‘s real-time decisions will use this potential to develop further one-off versions of SYNKEN.

[SYNKEN WILL BE IN THE SONAR FESTIVAL, BARCELONA] 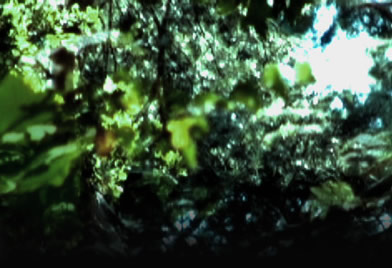