Five times around music. Five different entries to discover how deconstruction articulates itself in music.

In The Gift Of Silence [donner les bruits]: On Music, Noise And Silence, the apparantly clear borderlines between music, noise, and silence are questioned, among other things through the work of John Cage.
Specters Of Bach: On Gerd Zacher’s Kunst einer Fuge deals with a project of German church organist Gerd Zacher in which he deconstructs the first counterpoint of J.S. Bach’s Kunst der Fuge (The Art of Fugue).
In a totally different way deconstruction appears in the contemporary avantgarde rock music of John Zorn. Restitutions, Shibboleth or Aporias: On John Zorn and Burt Bacharach shows how deconstruction is at work in Zorn’s CD Great Jewish Music: Burt Bacharach.
The Truth in Teaching: On Deconstruction in Music Education knows a different approach. Point of departure here is the practice of teaching jazz music. What can deconstruction imply for teaching materials, teachers, and students in jazz education.

These four parts are, as it were, framed by Outwork. Deconstruction In Music: An Introduction. Besides some important ‘credentials’ (the ethical implications of deconstruction, f.e.), this part focusses on the relation between this work and other musicological works informed by post-structuralism and deconstruction.

This work would not have been possible without the texts of French philosopher Jacques Derrida. In On Deconstruction some ideas on deconstruction are discussed on the basis of Derrida’s oeuvre.

Five times around music. Wandering about/along/with music. Five times. Wandering from the straight and narrow of the order, of linearity, i.e. the teleology of an end in a beginning. Around music … Hesitating … Groping … ‘Reticence, as you know, is the figure of a deliberate keeping-quiet so that more than eloquence can be heard in it’, Derrida writes in Of Hospitality (p.95). How does one write with restraint? How is this task fulfilled?

Five times around music. Not denying the existence of gaps and uncertainties, not disguising problems, not trying to be complete or rounded-off. Not a clear method that seeks to decipher a truth but a series of encounters that affirms play. No conclusions. To arrive at conclusions would be to assume an authority I do not have. So, without any decisive ending … Not knowing where and when to end my writing around/beside/through music … Not knowing where to begin my writing … But … it has already begun. It has always already begun. 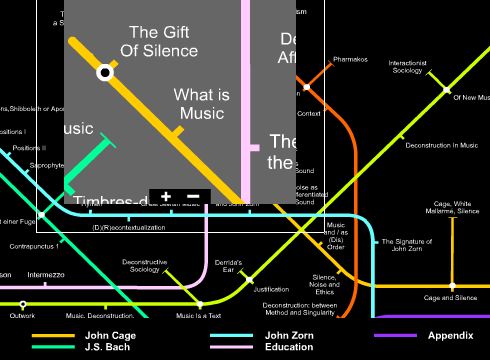