A Swarm of Angels (ASOA) is an open source film project, whose aim is to make the world’s first Internet-funded, crewed and distributed feature film. The collaborative project aims to attract 50,000 individual subscribers (the “Swarm of Angels”), each contributing £25 to the production. This feature film and associated original media project embraces the Creative Commons notion of flexible copyright licencing, to permit people to freely download, share, and remix the original media made for the project.[1]

A Swarm of Angels is the brainchild of film producer and author Matt Hanson, founder of the onedotzero digital film festival. He has labelled the process Cinema 2.0. It would be the first time for a project of this scale to be funded, produced and distributed in this way.

A Swarm of Angels is recruiting. People can have a say in the script development. Two scripts are being developed, with one to be chosen by ASOA members to be produced. The scripts are currently being developed via the project forum, and are entitled, The Unfold, and Glitch. According to the official website, A Swarm of Angels is “likely to be thriller based with soft sci-fi elements.”

The project had its first voting day on 21 September, 2006, where members were polled on certain decisions via their forum, The Nine Orders. 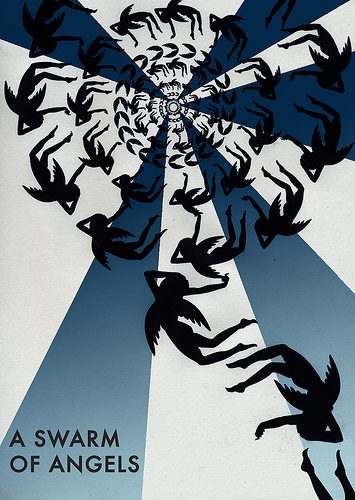