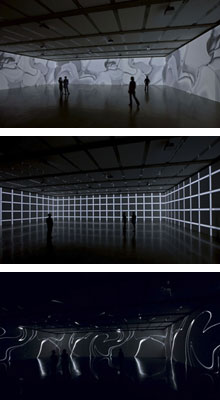 Over the past several years, the international art scene has seen a plethora of events attesting to a growing preoccupation with the place of music in contemporary art.

Invasion of Sound proposes a reading of the esthetic relationship between the visual arts and music as relating to culture, rather to cultures. Such an approach can encompass the whole of music and, at the same time, art in its entirety. To be precise, the exhibition pays particular heed to the points of friction between different musical genres, between different esthetic universes, between different cultures. In other words, Invasion of Sound aims to reveal how certain musical contexts of particular works disclose a critical distancing with the cultural, social, historic or political norms that the work addresses.

The tenacity of a carefree melody in the memory of those who have experienced exile, the improbable cross-pollination of a Baroque ensemble and a country orchestra, the harmony of a choir in the context of social suffering, the force of rock music or of a brass band interpreted as the history of a people, the melody of a flute as far-away echo of a revolution…. Taking forms ranging from brass-bands to symphonic orchestra, from street music to the score of road movies, from chamber orchestra to free Jazz, the genres are called on and merge in this proverbial voyage where singular works conjugate very different states of consciousness, and in which sonorous confrontations reveal attentions forgotten by and to the family of man.