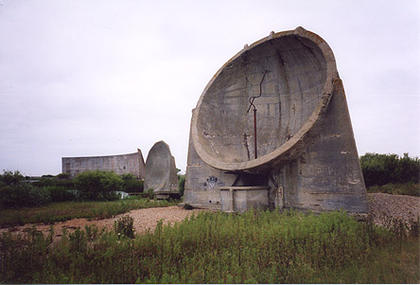 Salim sez, “In the 1920s the British military used these vast concrete parabolic ‘sound-mirrors’ to detect approaching aircraft. The ‘Listening Ears’ at Denge have recently been designated as a historical preservation site by English Heritage, the government quango in charge of protecting national landmarks. From Wikipedia:”

Acoustic mirrors did work, and could effectively be used to detect slow moving enemy aircraft before they came into sight. They worked by concentrating sound waves towards a central point, where a microphone would have been located. However, their use was limited as aircraft became faster. Operators also found it difficult to distinguish between aircraft and seagoing vessels. In any case, they quickly became obsolete due to the invention of radar in 1932. The experiment was abandoned, and the mirrors left to decay. The gravel extraction works caused some undermining of at least one of the structures.