The valve regulates the flow of gas and liquid. The fluid, which flows in the closed space like the pipe, shakes the valve to make vibration. The blood stream and the vocal chords vibrate. The water pipe and the gas pipe also vibrate. The city, the home and the body are consisted of the network of vibrating pipes. This network is an aggregation of vibrating pipes, however, the electric line is exceptional. It is a non-continuous network that is totally different from a delusive never-ending-network such as the Internet. It repeats the joint, the intersection, the divergence and the cutting with the valve. So the valve partitions them into compartments. They vibrate because they are materially partitioned.
The membrance conspires with the valve. It sends off the flow to the vibrating pipes and stores up outputs from the pipes. It is another adjusting device that regulates the flow together with the valve. It is another wall that partitions a material network into compartments together with the valve. And, it is a flexible vibration source.
The membrance actualizes the delusion of the network. It turns the electric signal into the physical change. Even the Internet, which is assigned the desire of never-ending access, cannot be visualized without the illuminant of membrance which consists of the cathode-ray tube or the liquid crystal display and cannot be aural without the membrance installed in the speaker.
The valve and the membrance can be considered as an analogy / a sign that connects the city with the body and the personal desire with the society. They relate to the delusion for the network and its substantial roots. They act as objects that connect irrelevant individuals, and disconnect them abruptly on the other hand. And, they are integrated into organs that breathe, lively vibrate and softly produce energy.
“Valve/Membrance” by Keisuke Oki, Minoru Sato, and ASUNA is an experimental project of the sound art concerning the network. They construct a material and / or an electric network by using the air flow outputted from the air pump as a source. Wind instruments and reed organs that are connected with vibrating pipes. The wind instruments equip the membrance to accumulate the air flow and to increase the air pressure. Oki operates the valves that control the air flow and make the sounds of wind instruments and a reed of each organ delicately. The reed organ, whose mechanism is exposed, works as the energetic body integrating each reed. It is actually ‘organs’ that breathe, vibrate and output energy flexibly. The sound is vibrations of not only a reed by the air pressure, but also the integrating reeds by own power (a suction motor). So it is practically tuned by ASUNA as the energetic body. The organ’s vibrations are picked up with the microphones, and sent to the glass tubes with a custom-made amplifier. The electric network, the valve as electric resistance, and the membrance of the speaker that creates physical vibration. Sato’s system, which networks one glass tube to another glass tube, emphasizes the natural resonance of the glass tube itself and forms feedback in the space. By repeating these processes, the entire concert place finally becomes the organization of the “valve and membrance” that breathes, vibrates and sends off energy, and plays music as the vibrating network.
We, Valve/Membrance, performed music with this network at Transmediale 2008 in January. We are currently in the middle of constructing the sound space containing more developed installational elements as a network. The new system should be completed soon. 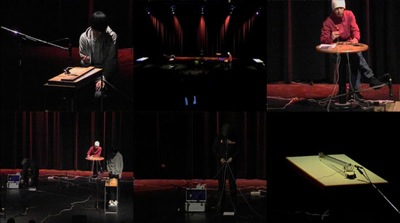