On September 26, 27 and 28 2008 the fourth edition of B-oost will rock the eastern docklands of Amsterdam. With the new Conservatory added as official stage, the organisation ads a new dimension to the event. Students of the Conservatory will attend masterclasses of artists which are programmed at B-oost. NPS Radio will record and Broadcast all concerts at B-oost 2008. The concerts will be broadcasted by Radio 6 on October 8 & 15 in the radioshow ‘Beyond’.

B-OOST 2008
The infinite dimensions of the cosmos inspired huge amounts of music, from Sun Ra’s Space is the Place to the extraterrestial explorations of Pink Floyd and the psychedelic funk of George Clinton’s Mothership Connection. The fourth edition of the B-oost festival will be a musical journey through space. This year B-oost teams up with KSpace.tv and My Spaceto host the premiere of the film ‘Dub Echoes’ by Bruno Natal in the OBA Theatre. For the Saturday it’s possible to visit the concerts in the Bimhuis and Muziekgebouw an ‘t IJ with a combination ticket, so you can enjoy the exciting concerts of as well the Metropole Orchestra as youngster Hip Hop-cats Truly Pheasant. Traditionaly B-oost closes of with a intimate surprise concert in the Lloyd Hotel. 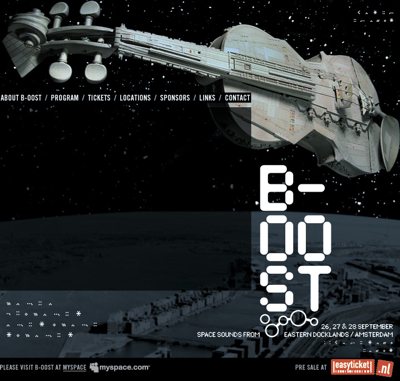