This is the first UK exhibition of work by the seminal Japanese artist and musician Yamataka EYE.

His grounding in music and the transformative power and chaos it can yield are ever present in his visual art. This exhibition will show elements from EYE’s major exhibition and publication ONGALOO. ONGALOO is a celebration of the greatness of life itself, the title comes from the phonetic expression of the Japanese phrase ‘On ga aru’, which carries the double meaning of ‘There is sound’ and ‘I am indebted’.

Working with a range of media including found objects, t-shirts, drawing and photography he creates collages that combine artificial and natural elements, pop cultural trash and psychedelic shamanism. His collages are influenced by things he experienced as a child, small illustrated picture books, the superhero Kamen Rider TV shows, techno-pop, punk and new wave music, oracles, mantras and the energy of the sun.

His work has been exhibited at Transplant Gallery, P.S.1 and Gavin Brown’s Enterprise, New York, ARTZONE, Kyoto and magical, ARTROOM, Tokyo. He has produced several catalogues including NANOO (1996) and ONGALOO (2006), and designed many record covers, including Beck’s Midnight Vultures. 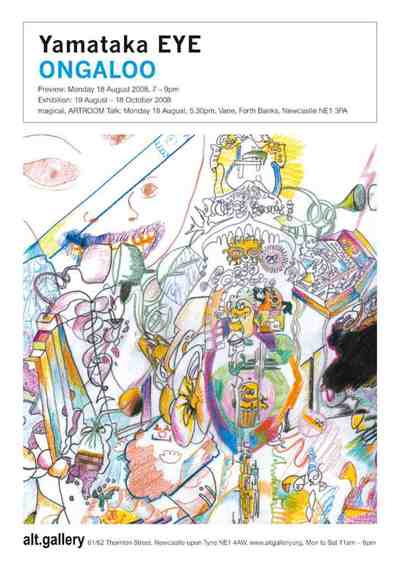