Initiated from the need to discuss and expand the ideas around radio as an active social enhancer and as an alternative against the retinian paradigms that sorround us, it Intersects multiple approaches and genders to achieve participative and social awareness,

Under the motto “new and forgotten ways of making radio”, RadiaLx2008 brings together new and old, allowing different forms of participation to emerge, melt and overlap in virtual and traditional broadcast interaction, redefining radio’s own identity and interaction range.

From the 20th to the 28th a special broacast will present art radio projects and programs submited to the festival through a worldwide open call initiative. The conferences, concerts and performances happening during the festival can be followed through this special stream, a realization of the Radia network with participation of several international and local artists. 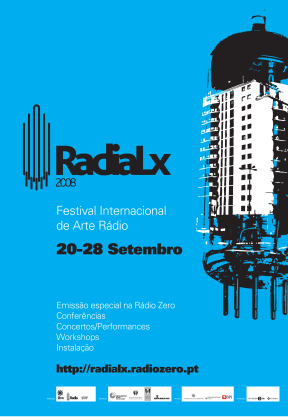