After four long, difficult years I have been released from my legal ordeal. I want to thank everyone who supported me through this—the greatest challenge I’ve ever had to face. I feel vindicated today because I am innocent, but today I am also humbled by a legal and political victory that is not mine alone. Everyone who contributed their support to this case can lay claim to a victory against the forces aiming to abridge our fundamental rights. I am mindful that my case was just one of many examples where fear and irrationality gained the upper hand after 9/11. I am aware that my vindication is an exception. I continue to have anxiety about the outcome of many pending cases still awaiting justice.

Although it seems that my case has come to a conclusion, it is only now that I can fully comprehend the immensity of what happened. The tragic death of Hope was a profound loss. The unfortunate events following Hope’s death occurred at a moment of intense pain and sadness for all of us. Neither my life nor the work of Critical Art Ensemble has been the same without her. If she were here today, I know she would be proud of everything that has been done by all the people involved. Collectively, we stood without flinching, and defeated a monster of social injustice. Hope always said that we should “never surrender” to authoritarian power, and we didn’t. 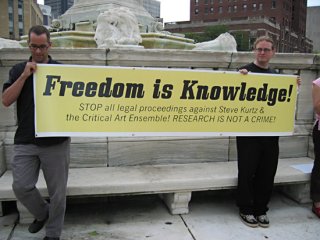