Born in 1945
Travelled for two years in Niger, with the idea of an artistic “give and take”.
Discovers the dancers of the region.
He is initiated by nomadic people in the songs of the “straight “ flute.

Utilizes natural elements of all forms for his creative works
1988: Purchased by the National Fund of Contemporary Art: A shield hardened by fireb.

The analogy between the appearance of sounds, -linked on one hand to combustion, and on the other hand to the inhaling and exhaling of breathe-, “lit the flame” for Michel to create in 1989 the first Orgue a Feu. In 1990, with the help of the “Centre National des Arts Plastiques” (the National Center for Decorative Arts), he staged an exceptional performance in the Thermal Center of Perm, in the ex-USSR: a giant fire organ, created from oleoduc tubes, which allowed him to harness the energy from the Thermal Center for the first Thermal Chants.
After, Michel alternated between research and creation, for public events and spectacles. More specifically: in Belo-Horizonte, Sao-Paulo, Istanbul, in the International Festival of Baalbek (Lebanon), and lastly at the City of Music, or at the foot of the Geode of the City of Sciences, which are both in Paris.

The”Fire Organ” is an instrument that transforms the heat from a flame into a new energy source, that of sound.

The thermal exchanges that take place in the tubes of the Organ, which are generated by multiple vibrations within, are directly linked to meteorology. In particular, the idea of unstable equilibriums, the liberation of energy occurring between the conflicting masses of hot air, with those of cold air.

Fire, Air, Metal (those alloys born from the earth), Water in all of its forms, and then of course Life, which combines plants and animals from our planet, of which We – humans- are merely a humble part. The Thermal Instruments take these essential elements, and uses them to their advantage, as each new “alchemy” forges sounds which we call the“Thermal Chants”.

Being in permanent evolution, the “Fire Organ” is made up of several complementary installations:
– Thermal Percussion: which liberates the breaths of the fire in titanium tubes
– Thermal Flutes: which transform the flame from the burner into high frequency sounds
– The Thermal Scales, which oscillate over a fixed flame
– The Continual Thermal Sound, is the continuous vibrations of a column of air within different sizes of glass tubes 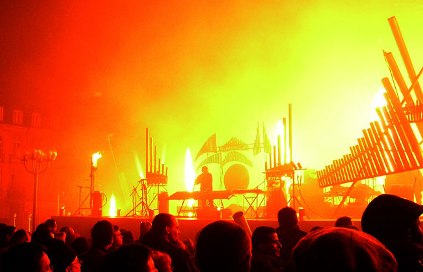