“Die Tödliche Doris is still one of the long runners of German avant-garde art. If there is a theme in their artistic work then it is the search for signs of life, coupled with the attempt to breathe new life into them.” Journal Frankfurt, 1991

This is the first UK exhibition of work by the innovative Berlin art-punk group Die Tödliche Doris (The Deadly Doris). Founded in 1980 the group created records, tapes, films, performances, and exhibited their work widely including at documenta 8 in Kassel. Their seven-year plan saw the group dissolved into a bottle of Italian white wine in 1987, however Doris has had an afterlife through re-workings of documentation and recordings.

Led by artist Wolfgang Müller, Doris was conceived both as a conceptual music group and a character resembling a super housewife philosopher. Dada inspired, her identity constantly evolved, refusing a singular definition or image; the bands’ logo was a Sparkasse Bank logo inverted, which made it look like a question mark. Their work playfully questioned the dominant power of the information system and its transformation through language, fashion and the media.

This exhibition will re-present their 1981 record “Die Tödliche Doris” and its re-release fifteen years later, interpreted through gesture and sign language. The thirteen tracks on the LP each have a different personality trait expressed through different fashion designs, including pearl braces, carpet-tile-hair-do, wig bikini and the woodpecker shoe. The exhibition will show each fashion item and a video of the sign language interpretation, translating the original music and lyrics into a form of soundless music. This will be accompanied by images of the group taken by internationally acclaimed US photographer Nan Goldin.

The Deadly Doris were central to the new atonal music scene in 1980s West Berlin, performing at Martin Kippenberger’s infamous music venue SO 36. In 1981 they performed at the Festival of Ingenious Dilletantes alongside Einsturzende Neubauten, Nekropolis and Gudrun Gut, an event considered to have encouraged the birth of techno music. Attempting to ignore the division between high art and subculture, amateurism and dilettantism were celebrated as democratic forces against both the capitalist system and GDR socialism.

A limited edition print and multiple are available for sale to accompany this exhibition. 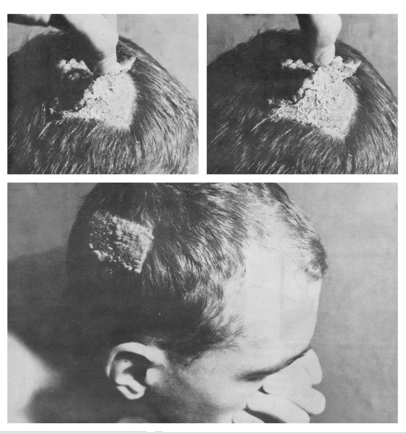