The Polyphone attachment was one of the more unusual inventions in the early history of the phonograph. Patented in 1898 by Leon Douglass (who would later become president of Victor Talking Machine Co.), the Polyphone was marketed by the Talking Machine Company of Chicago, in conjunction with famous phonograph pioneer H.E Babson. Polyphone attachments were made to fit the Edison Gem, Standard, Home, Concert, Spring Motor and Class M, as well as the Columbia Type A and Columbia Type B ‘Eagle.’ The principle of the Polyphone was simple: two separate reproducers with two separate horns track the same groove of the cylinder, only a fraction of a second apart. The company’s advertising claimed it had “the sweetness of many echoes instantly combined,” further stating that it was “more than twice as loud and many times more musical that any other Talking Machine.” The reality is that the very slight delay of the second reproducer gives an artificial reverb. However, the effect is absolutely amazing! The sound quality is truly remarkable, far superior to a normal phonograph. (Standing directly in front of the horns even gives an illusion of stereo.) It was one of the few phonograph inventions that almost lived up to its original hype, but it was never a big success and was rendered obsolete by the louder molded cylinders released in 1902. Very few survive, perhaps because it is not easy to adjust the stylii to track perfectly — and an out-of-adjustment Polyphone definitely does NOT sound very musical!

This Polyphone attachment is mounted on an early Edison Standard, sometimes called a ‘Square Top’ or ‘Suitcase’ Standard because of the square lid and suitcase-type latches. The cabinet carries a very rare decal from Edison dealer Peter Bacigalupi in San Francisco, who promoted Polyphones widely. In addition to the decal on the front of the machine, Bacigalupi’s name and address are stencilled on the bottom of the case. 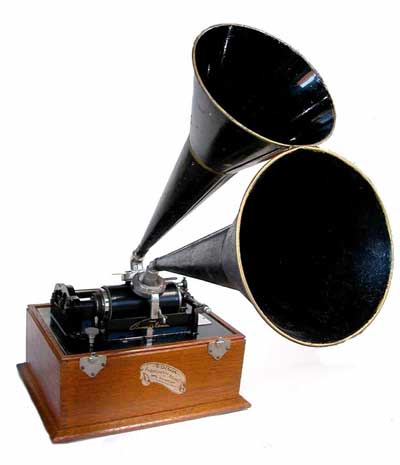