Cultural Crisis Petition — Read and scroll down to sign

We: musicians, performing artists, presenters, and fans and supporters of new and experimental musics, are petitioning the City of New York to

* Recognize the cultural and economic importance of new and experimental musics,
* Recognize the market failure and cultural crisis brought on by the rise in rents and other factors, the symptoms of which include the closing of important venues like CBGB’s and Tonic, and
* Act now to prevent the further destruction of New York City’s historical legacy, cultural assets, and future as a center of creative music.

We make the following three demands:

1. That the city council adopt a general principle similar to European cultural policy: that the arts should not be left to the mercy of market forces: so that new and experimental musical culture, which is a unique asset — and an essential part of New York’s history, economy, and identity — will not be left without support.
2. That the city recognize the damage done to its cultural heritage and status as a ‘cultural capital’ by the displacement of venues central to experimental musics, and act now to protect those remaining venues from displacement — either by providing funding sufficient to allow them to withstand the explosion of commercial rents, or by legislation forcing landlords to restrict rents of culturally valuable venues, or both.
3. That New York City intervenes to preserve 107 Norfolk Street as an experimental music venue, or make available a comparably sized and centrally located space for that purpose. 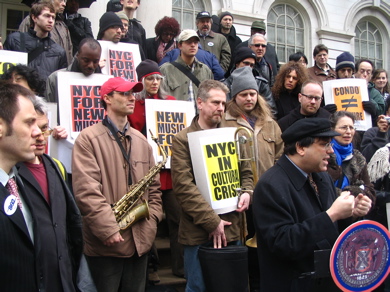