CHANGES:
-Bugfix: Smoothing of sends and crossfader knobs. The smoothing of send knobs and the crossfader was not working. This could result in clicks when making fast changes using these knobs.
-Bugfix: Crash when clip is fired in last scene. Live would crash when a clip in the last scene was fired and other scenes are deleted before the clip starts playing (the crash occurs when the clip starts playing).
-Bugfix: Crash with sample reverse. Live would crash during sample reverse caused by loop controllers trying to set the loop off (or on) under certain circumstances.
-Bugfix: Crash when deleting MIDI Track. Under certain circumstances Live would crash when deleting a MIDI track.
-Bugfix: Crash with MIDI Learn button. When selecting several clips and pressing the MIDI learn button Live would crash immediately or after some more actions.
-Bugfix: Hanging notes when deleting scene. Fixed hanging notes when deleting a scene currently playing a midi clip currently playing a note.
-Bugfix: “Invisible” Arranger Fade Outs. Under certain circumstances Live would created invisible fadeout in the arranger.
-Bugfix: Deleting scene with blinking slot. When a scene was deleted that has a blinking slot, the track stop button would start blinking (and never stop until the next clip is fired).
-Bugfix: Tap tempo during loop back jump. When tapping the tempo while the playing position changed because of arranger loop back-jump, the tempo could temporarily jump to some high values (300BPM).
-Bugfix: Red D. Sometimes the “Red D” flashed When two or more clips lay directly after each other.
-Bugfix: Vinyl Effect. When a Live set was rendered containing a Vinyl audio effect the drive parameter was not rendered right.
-Bugfix: [OS X] Removing MIDI interface devices. Live would crash when more than one MIDI interface device was removed at the same time. This fixes a crash when Live was running parallel to Max/Msp and Max/Msp crashed.
-Improvement: Follow Actions. When dragging a clip on the warper view the follow actions will be copied now. 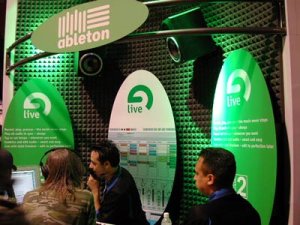