The intended goal with TibetBot was to create a robotically controlled percussive musical instrument that could create both atonal rhythms as well as tonal droning soundscapes. The instrument is based on the tones produced by three Tibetan singing bowls struck by six robotic arms, two per bowl.

The singing bowl is a traditional instrument of the Mahayana and Tantric sects of Buddhism centered in Tibet. Each bowl produces several harmonics and two “major” tones (a high pitched ring and a low pitched drone, both complimentary of each other). The tonal quality is an artifact of each bowl’s construction. Traditionally, bowls are constructed from seven different metals formed into a distinctive dome shape. The combination and density of these metals is what produces the distinct tonal quality of the instrument. […]

The robotic arms are controlled by a MIDI-to-analog circuit board. The circuit board converts MIDI note commands to analog on/off signals. The on/off signals are then sent specifically to each solenoid to move the arms that strike the three bowls.

The instrument was made to be portable. It can be taken apart and reassembled, and it uses a superstructure of lightweight aluminum bar. TibetBot was designed to complement both acoustic and electronic instrumentations. The instrument is best used to create slow rhythms or delicate drones. […] 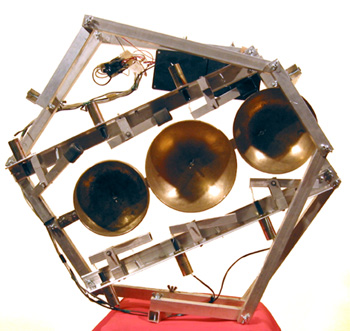