An audiovisual instrument with a drawing-based interface. Sound is generated in a manner similar to scanned synthesis, with two oscillators whose waveforms are obtained by scanning the x- and y-axis positions of the trail drawn by the user. The larger the gesture, the louder the sound, and vice-versa, when the mouse is not moving, no sound is generated.

Sending MIDI notes to it will change the pitch of the audio. If you click a mouse button, you will freeze the motion of the brush, and thus the waveforms for the two oscillators will also freeze. The position of the brush, and whether it’s frozen, are both automatable parameters. As the only way to get sound out of the instrument is to move the brush, you won’t be able to record or sequence it in quite the same way you would other VST instruments. Instead of straightforward MIDI data, you’ll need to record your mouse movements as automation. 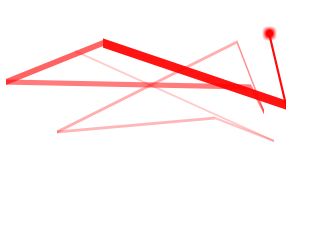