There is more to sound recording than just recording sound. Far from being simply a tool for the preservation of music, the technology is a catalyst. This is the clear message of Capturing Sound, a wide-ranging, deeply informative, consistently entertaining history of recording’s profound impact on the musical life of the past century, from Edison to the Internet.

In a series of case studies, Mark Katz explores how recording technology has encouraged new ways of listening to music, led performers to change their practices, and allowed entirely new musical genres to come into existence. An accompanying CD, featuring thirteen tracks from Chopin to Public Enemy, allows readers to hear what Katz means when he discusses music as varied as King Oliver’s “Dippermouth Blues,” a Jascha Heifetz recording of a Brahms Hungarian Dance, and Fatboy Slim’s “Praise You.”

Maybe, but that was not my point. My claim was that the technology of sound recording, writ large, has profoundly transformed modern musical life. At its broadest, that is the thesis of Capturing Sound.

This thesis may at first seem counterintuitive. After all, the function of recording, or so it might seem, is to record music, not to change it. Indeed, for more than a century, what I would call a discourse of realism has reinforced the idea of recorded sound as the mirror of sonic reality, while at the same time obscuring the true impact of the technology. Consider the series of television and print ads from the 1970s and 1980s in which the voice of jazz great Ella Fitzgerald was shown shattering glass. While a feat in itself, more remarkable was that it was Fitzgerald’s recorded voice that had such awesome power. Though the purpose of the ad campaign was to sell cassettes, it espoused the ideal of realism. “Is it live, or is it Memorex?” consumers were asked. The implicit answer was that the two were indistinguishable.

Memorex was not the first to make such a claim. Turn-of-the-century advertisements touted recordings as “lifelike,” “a true mirror of sound,” “natural,” and “the real thing.” In the 1910s and 1920s the Victor Talking Machine Company ran ads that would make an ontologist’s head spin: beneath illustrations of famous artists standing next to their records, captions proclaimed: “Both are Caruso,” or “Heifetz is actually Heifetz.” Like Memorex, Victor and its competitors were in the business of selling sound, and it behooved the industry to convince consumers that the tiny grooves incised in the black discs could somehow capture the essence of their flesh-and-blood musical idols. As Oscar Wilde once remarked in a very different context, “What a fuss people make about fidelity!” 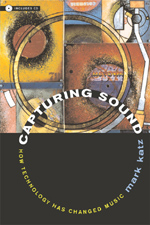