LITERAL:
Generic Description: –
GeneMusiK is an experimental biological music mixing and generating system currently under development by Dr Nigel Helyer at the Faculty of Natural and Agricultural Sciences, Univesrity of Western Australia under the aegis of ‘SymbioticA’.
The GeneMusiK project is designed to establish a functional relationship between conventional Western musical scales and DNA sequences and produce a system for mixing and mutating musical form within a biological context.

Whilst there have been several interesting attempts to transliterate DNA code into musical forms and notation these have invariably been theoretical analogues GeneMusik departs from previous experiments in that it is an entirely ‘wet’ process, which employs chemical and biological means to achieve musical transformations. Rather than taking given DNA structures and rendering them as musical code, GeneMusik takes fragments of conventional Western melody and sequences them as DNA that is subsequently ‘bred’ and ‘mixed’ within bacterial cultures.
[…] 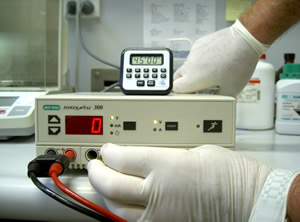