Electronic music is quite like magic. In acoustic instruments there is a direct corresponcence between what you see a musican do and the resulting sound. The effect of circuits and connections is as spectacular as the jerking of frog’s legs was in early electricity demonstrations. They can magnify and alter sound, to the extent that it is rendered totally unrecognizable. By means of electronics sounds may apparently be conjured up out of thin air.
Roughly speaking, musical applications of electronics have developed along three paths. Autonomous instruments were invented to be used in conjunction with acoustic instruments. Studios with elaborate equipment were founded which composers used to put together complete pieces that could be played back from audio setups. There were also people who devised applications that gave them immediate control over acoustic and electronic sounds.
In the first half of the twentieth century instruments were developed that could generate tones electronically, such as the Theremin, the Mixtur-Trautonium and the Ondes Martenot. Of these the Theremin was the most astonishing being controlled by waving movements, the Mixtur-Trautonium was the most advanced. It was the only instrument of the three that could be played polyphonically, and it had limitless possibility for creating and altering timbres.
In the 1950s special studios were built in Europe for electronic music, often affiliated to institutions, where composers recorded their electronic music on tape. In the United States people who were part composer, part inventor started a different development. They focused on generating and processing sounds live. The first example of this was Imaginary Landscapes No. 1 from 1939 in which John Cage combined piano and percussion with varispeed gramophones, playing test tone records.
The inventor’s mindset of John Cage has long characterized the field of live electronics. Composers such as David Tudor, Gordon Mumma, Nicolas Collins and Mark Trayle were and are inventive in soldering circuits – in their hands devices start doing things they were never built to do. Initially they obtained their components from war surplus stores, but later on consumer electronics are increasingly being victimized as well. The home-built equipment opened an entirely new universe of sounds, structures and possibilities for interaction with acoustic sound sources.
This era of tinkering and inventing ended with the advent of digital electronics. Surplus stores stopped selling components for circuits and appliances. The action has all but moved to the realm of binary digits. A new, virtually incorporeal, magic with a shiny cover.
The Gaudeamus Live Electronics Festival presents a selection of composers, musicians and music in this genre, from pioneer Gordon Mumma to contemporary sound magicians such as Francisco López. 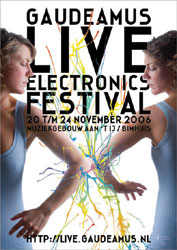