The collaborative album Ekkert Nafn was composed from sound materials collected by Francisco López and Miguel A. García. Some of these materials were derived from field recordings, others from electrical and mechanical devices, all were manipulated with digital tools to varying degrees. After compiling the collection of sounds, both artists proceeded to compose independently, arriving to pieces that inevitably intersected each other’s aesthetics. In the two chimeric works presented in this album, we may recognise each artist’s authorial identity intertwined with the other’s in multiple and surprising ways. The title of the release is actually yet another manifestation of this superposition: García often uses invented words to title his pieces, looking for sounds and forms that somehow connect with the music. Sometimes, within these invented words, he discovers words from languages he does not understand. Ekkert Nafn happens to not be made up of invented words — although it could have been — but is composed by two Icelandic words that translate to the quintessential López title, No Name. 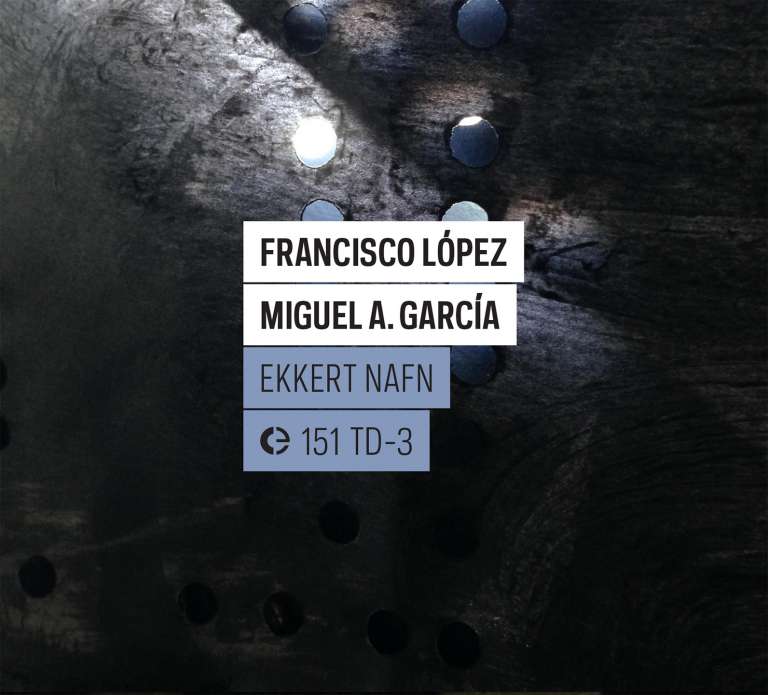 Francisco López is internationally recognised as one of the major figures of the sound art and experimental music scene. For forty years he has developed an astonishing sonic universe, absolutely personal and iconoclastic, based on a profound listening of the world. Destroying boundaries between industrial sounds and wilderness sound environments, shifting with passion from the limits of perception to the most dreadful abyss of sonic power, proposing a blind, profound and transcendental listening, freed from the imperatives of knowledge and open to sensory and spiritual expansion. He has hundreds of concerts, projects, workshops and sound installations in over seventy countries of the six continents. His extensive catalog of sound works has been published worldwide, including live and studio collaborations with hundreds of international artists. He has been awarded four times with honorary mentions at the competition of Ars Electronica Festival and is the recipient of a Qwartz Award for best sound anthology.

Miguel A. García (aka Xedh) is a restless sound artist living in Bilbao. Trained in Fine Arts, he works on electroacoustic composition and improvisation, using sources obtained from the manipulation of electrical devices, sometimes mixing these with sounds of acoustic instruments and field recordings. He has performed extensively across Europe, America and Asia, and appeared on more than a hundred albums. He is also part of the coordination of Hotsetan en Azkuna Zentroa, founder of Klub Larraskito, and director of the Zarata Fest festival, all of them platforms for the diffusion of risky music and related disciplines.
_
Untitled #351 created by Francisco López at ”mobile messor” (Den Haag, Chicago, Ljubljana, Gougan Barra, Kathmandu, Paris) and Dune Studio (Loosduinen), 2013-2017.
Applainessads composed by Miguel A. García in 2018.
Mastered by Francisco López.

This is a joint release with Tronicdisease.