AUDIO ON THE MOVE

Responding to a series of ideas which have appeared in various net contexts, New Media Fix will be featuring an ongoing editorial project on sound and audio-based artworks which utilize ‘audio’ as a means to break spatial conventions and/or to problematize the idea of ‘location. ‘Audio on the Move’ features creative projects which question and explore notions of public space, space as interface, social ritual, and/or artistic and self expression.

Edited by artist/curator Molly Hankwitz, ‘Audio on the Move’ starts in June, with revolving projects and comment. Projects may be submitted for inclusion to: editor@newmediafix.net

“Karaoke Ice” is a cheeky ‘mobile audio’ work selected for the ISEA 2006 ‘Interactive City’ commission. “Karaoke Ice”, the first project highlighted for ‘Audio on the Move’ was conceived by artists Nancy Nowacek, Marina Zurkow, Katie Salen. They conceptualize the work as follows:

This project demonstraties how sounds of cities contribute to, and are part of, the experience and making of spatial organization and convention. Individually or collectively produced, sounds are the audible evidence of patterns, of social ritual and locations embedded in life, history, and memory. By articulating two strands (at least) of sound making, “Karaoke Ice” sweetly invites listeners to engage the city from the inside out, suggesting through interface with popular activities and their audio how cities are comprised of multiple, entwined and emotionally emanating cultures.

For an interview with the artists:
http://switch.sjsu.edu/mambo/switch_21/karaoke_ice_.html 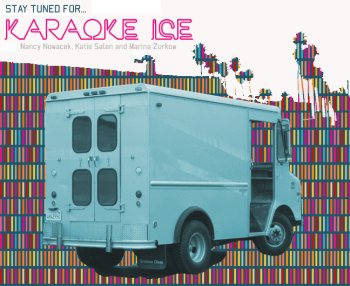