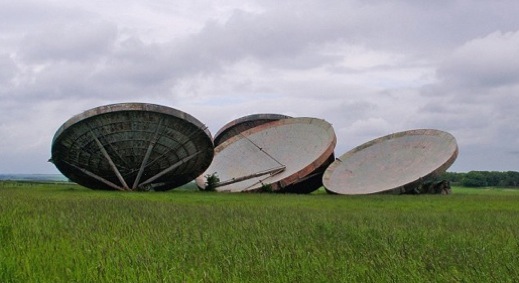 Crumbling in a heap in the middle of a field, these giant dishes once stood as a key defence during the Cold War.
The RAF Stenigot was one of 20 vital relay centres which enabled NATO commanders communicate across the globe as relations the Soviet Union disappeared behind an Iron Curtain and the threat of nuclear war grew.
But now the giant parabolic dishes have been allowed to fall into disrepair in a farmer’s field in rural Lincolnshire – a distant relic of the clash between East and West.
RAF Stenigot had been of vital strategic importance during World War II.The base had been part of a series of radar antennae called the Chain Home radar network.
These early warning systems used radar waves to detect enemy German planes within 30 miles – allowing British fighters to be scrambled in time to intercept them. +