The NYSoundmap project officially launches January 10, 2006 on Rhizome and Free103point9 as part of Surge, an online exhibition of web-based projects.

Maps are tools for understanding the world from different points of view – political, cultural, personal, and historical. Maps hold the power to shape the truth about the world and mapmakers shape the future. The NYSoundmap is a container – a concept or idea to hold many types of processes and projects. The project reaches across the city’s geographic, economic, educational, cultural and racial divides. It is at once a historical record and a subjective representation of the city. It is what each user wishes it to be and it is ever growing, ever changing and totally interactive.

SOUND-SEEKER: What kinds of sounds can you find in New York City? With sound-seeker, you can zoom, pan and search for sounds with interactive satellite photos or detailed maps. Click on hot spots to listen to the recorded sounds of a location pin-pointed by GPS. Sound-seeker was created using GoogleMaps and isn’t viewable in all browsers.

PROTEST, TRANSPORT, CELEBRATE: What did New York City sound like 30 years ago? Artist Andrea Callard lets you hear city sounds she recorded in the 1970’s. Listen to chorus of truck horns as hundreds of striking truck drivers came out of the Holland Tunnel and over the Manhattan Bridge into Brooklyn on July 1, 1979 and the sounds of the downtown churches ringing their bells to celebrate the first 200 years of the U.S.A. on July 4, 1976.

GIANT EAR ))): The last Sunday of every month, NYSAE hosts a webcast radio show called Giant Ear))) from 7-9 PM at Free103point9. Shows feature a wide range of recordings including: Transcedental Sounds: Bells, drones, glossolalia and other otherworldliness of the everyday, Get Yer Cans On! A Headphonic Trip Around the World, recordings of the RNC Protests in 2004 and What does freedom sound like to you? interviews with brokers at the NY Stock Exchange. 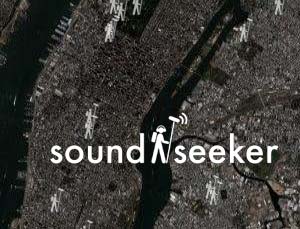