After studying philosophy at Sophia(Tokyo) and Waseda universities, Tetsuo Kogawa spent many years in New York City. He taught at Wako University and Musashino Art University and is currently Professor of media experiments at Tokyo Keizai University’s Department of Communication Studies. Kogawa introduced free radio movement to Japan, and is widely known for his blend of criticism, performance and activism. He has written over 30 books on media culture, film, city and urban space, and micro politics. He has shown his artistic and useful workshops to build Mini-FM transmitter in many cities of Canada, US and Europe. Most recently he has combined the experimental and pirate aesthetics of the Mini-FM technology with internet streamed media in such projects as “Radio Party”, “Translocal Palimpsest”, and “Radio Kinesonus”. 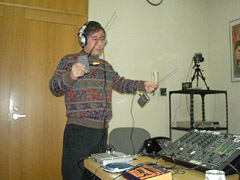