Is there a connection between sound, vibrations and physical reality? Do sound and vibrations have the potential to create?

LITERAL:
Some years a back I remember being drawn to fine circular geometric patterns being formed in a glass of water on a table in a room resonating to the bassline of a Roland TB-303 Synth.

The intrinsic geometric forms found in nature, the microscopic and macroscopic also are also being perpetrated through invisible forces such as sound waves. Hans Jenny pioneered the study of wave phenomena, and named the art/science Cymatics – derived from the Greek Kyma or kymatika meaning matters pertaining to waves. Over a period of years he animated dust particles, liquids and Iron fillings using sine-wave vibrations within the audible range. All too familiar patterns begin to be formed in these substances as a result of the sound shaping form. In 1967 Jenny published the book ‘Cymatics – The Structure and Dynamics of Waves and Vibrations’. Moving on from the use of sound generators Jenny eventually invented his own machine for producing very precisely controlled oscillations. The Tonoscope could allow very exact and reproducible experiments to be carried out – at its core were a set of crystal oscillators.

Hans Jenny noted to similarity between his sonic patterns and the patterns found all around us and concluded that biological evolution was a result of vibrations – if not connected to it.

The science of visualising sound waves has a history and goes back further then Jenny beginning with Ernst Chladni. Chladni found a way to visualise sound waves by drawing a violin bow across the edge of flat plates covered with sand, the patterns he produced go by the name of Chladni figures.

’Symmetry and harmonics’ by Joost Rekveld (click on ‘texts’) explores many of these ideas and is a great preliminary reader on the history of visualising sound. He importantly draws connections between the early experimenters and later work by filmmakers such as Mary Ellen Bute and Norman McLaren who used oscilloscopes to generate moving images. It’s also interesting to note certain similarities to the geometries of some recent symmetrical generative art. 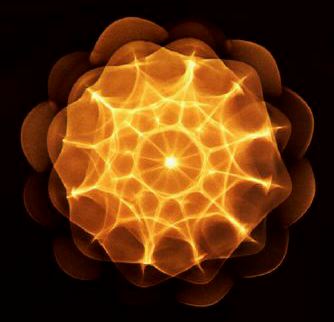