LITERAL:
Since the beginning of 2000, the name “Park” has been a synonym for a group of artists dealing with media and art. Although from the start, it has been the idea that there should not be any limitation of media, over the years almost all members of the family chose music to be their way of expresing themselves. Park’s debut EP “Melancholik”, initiated by Frank “Netpoet” Stiegler, Hendrik “A-Move” Stöteler, Kristian “Velvet” Perusic and Jacek “Falcon” Dojwa showed how much the tendency strived to relaxed and cozy music.

This, however, was no limitation for the following publications by the new members Matthias “Xenon” Risse (graphician, photographer and programmer), Uwe “Chimerical Child” Holland (media artist), and Guido “DHG” Lorenz (musician) because there was a common aim. Aesthetics, synaesthesia and handcraft ? three virtues playing the major role for the collective without setting borders.

At common performances and exhibitions, the members work out a fitting media and bring it to bloom.

Park is an idea of presence and refuses to accept any limits. 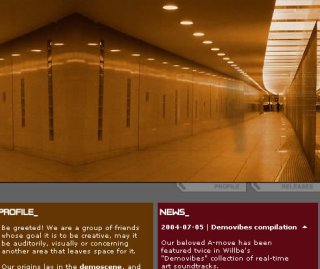