Can You Keep A Secret?

The cultural imagination has long been infected with images and stories about grand conspiracies and government plots involving deception, secrecy, and general ill will, often with ample justification. But where do the ‘X-Files’ intersect with the world existing outside of the mind of Hollywood writers? If you’ve ever seen the work of Trevor Paglen, you are at least looking in the right direction. A Berkeley-based artist and geographer, Paglen produces multimedia presentations–including performative lectures, zines, and video installations–about the vast world of secret military programs in the US Southwest, fed by regular excursions into the often remote, and surprisingly banal, world of guarded defense bases and budgets. You can catch one of Paglen’s lectures on America’s ‘Secret Bases,’ along with Bruce Gagnon’s film, ‘Arsenal of Hypocrisy,’ and Megan Prelinger Shaw’s installation, ‘Atomic Cabinet,’ this Saturday, September 17th, as part of the Other Cinema series! at San Francisco’s Artists’ Television Access. That is, if you’re brave enough to take off your tin foil hat and venture outside. 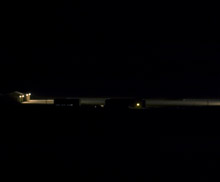