LITERAL:
A Measure of Anacoustic Reason–by Raqs Media Collective–is an installation that registers a process of thinking about forms of reasoning that insulate themselves from listening. The installation sees the act of ‘turning a deaf ear’, as the unwillingness or inability to listen to the voices that refuse to be accommodated into the master narratives of progress, of instrumental reason and the domestication of space through the geomancy of corporations and nation-states. The visitor is invited to undertake his/her own audit of anacoustic reasoning through a meditation on a series of dialogues and rebuses that encrypt a set of paradoxes about the grandiose follies of seeking to rule the world by not listening to it.

A Measure of Anacoustic Reason is an installation consisitng of 1 projector, 4 screens, 4 dialogues, 4 lecterns and a lightbox. It was shown at ICon: India Contemporary at Venice Biennale 2005 (14 June-31 July, 2005) 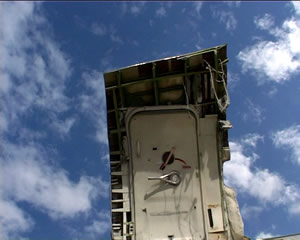