Echo Chamber is an interactive environment for audio visual composition. This 3D navigable soundscape persuades people to make noises into the space and encourages the act of listening.
Echo Chamber is a world in which sound is trapped in an infinite echo. Participants can make a sound into the environment via a microphone, where the sound is then re-synthesised to amplify the intent of their actions. These sounds then travel around, leaving a trace of history from each participant. The installation becomes a more personal experience to that user as a part of them is left behind.
The sounds in Echo Chamber take on a life of their own, each sound being visualised in the form of a 3D object. Each object is known as a boid, a term for artificial intelligence algorithms that are used to describe the flocking behaviour of birds and swarming of fishes. Each boid or sound in the chamber is aware of where it is, to avoid the walls, to chase other sounds of the same species and avoid other boids.
The whole soundscape adapts to the overall feeling of the sound being produced. The organic 3D structure moves and pulsates in time with the music and the lighting changes depending on the different sound groups that exist.
Sound is spatially positioned around the user using a multiple speaker system, as if the sounds were moving around the physical space. 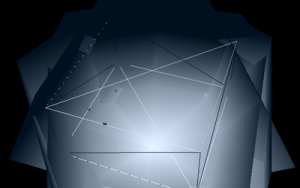