Musical hallucinations were invading people’s minds long before they were recognized as a medical condition. “Plenty of musical composers have had musical hallucinations,” Dr. Aziz said. Toward the end of his life, for instance, Robert Schumann wrote down the music he hallucinated; legend has it that he said he was taking dictation from Schubert’s ghost. […]

While doctors have known about musical hallucinations for over a century, they have rarely studied it systematically. That has changed in recent years. […]

Dr. Aziz believes that people tend to hear songs they have heard repeatedly or that are emotionally significant to them. “There is a meaning behind these things,” he said. […]

Dr. Griffith proposes that deafness cuts off this information stream. And in a few deaf people the music-seeking circuits go into overdrive. They hear music all the time, and not just the vague murmurs of a stuck tune. It becomes as real as any normal perception. 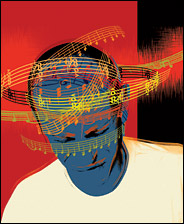