WorldEar is a device that would be installed in public transportation around the world. Scrolling through a list of cities enables users to hear ambient sound from the city shown. If the record button is pushed, the user can record a brief message which gets sent out to ride on the ambient sounds of the world commute and will come out at some other place at some other time.

Network technology has enabled the world to connect in many ways. World Ear creates connections between cities in multiple time zones creating an understanding of the universal phenomena of transit and its movement across the globe. World Ear would be located at the head-height of seated passengers in trains around the world. Because of its low volume, users must actively turn their heads and listen to other worlds.

Live ambient sound will be transmitted using the wireless network in place in many of the subway systems around the world. When the record button is pressed, the user can record a five second message, which will be sent to the main server and stored. The main server randomly picks up messages and distribute them at a later time. 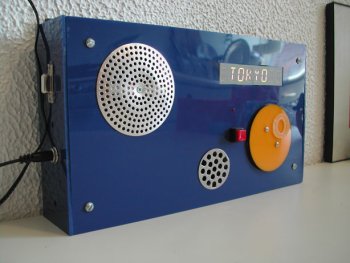