Unlike other new media artists who may create art to justify their theories, Amerika documents the emergence of new media art forms while he creates them. Presenting a multifaceted view of the digital art scene on subjects ranging from interactive storytelling to net art, live VJing, online curating, and Web publishing, Amerika gives us “Spontaneous Theories,” “Distributed Fictions” (including his groundbreaking GRAMMATRON, the helpful “Insider’s Guide to Avant-Garde Capitalism,” and others), the more scholarly “Academic Remixes,” “Net Dialogues” (peer-to-peer theoretical explorations with other artists and writers), and the digital salvos of “Amerika Online” (among them, “Surf-Sample-Manipulate: Playgiarism on the Net,” “The Private Life of a Network Publisher,” and satirical thoughts on “Writing as Hactivism”). META/DATA also features a section of full-color images, including some of Amerika’s most well-known and influential works.

Provocative, digressive, nomadic, and fun to read, Amerika’s texts call to mind the cadences of Gertrude Stein, the Beats, cyberpunk fiction, and even The Daily Show more than they do the usual new media theorizing. META/DATA maps the world of net culture with Amerika as guide and resident artist.

Mark Amerika, named a “Time Magazine 100 Innovator” in 2001, is an interdisciplinary artist and Associate Professor in the Department of Art and Art History at the University of Colorado at Boulder. His works include the epic online narrative GRAMMATRON, selected for the 2000 Whitney Biennial; the sound art work PHON:E:ME, commissioned by the Walker Art Center in Minneapolis and the Perth Institute of Contemporary Art in Western Australia; and FILMTEXT 2.0, initially commissioned by Sony PlayStation 2 as part of a major retrospective at the ICA in London. He is the author of two novels, The Kafka Chronicles and Sexual Blood. In 1993 he became founder and publisher of Alt-X. 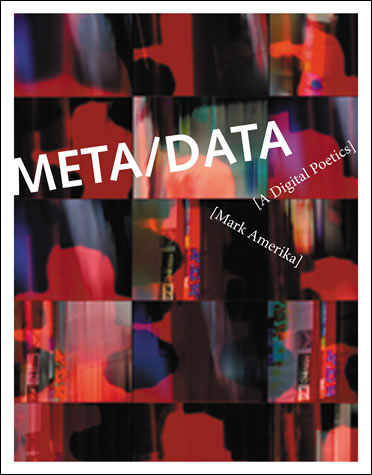