Sound Spaces are not just spaces in which sound can be heard. Rather, it is sound itself that creates the space and its special qualities. Therefore the experience of hearing not only enables us to experience the space around us, they can also make it possible to experience physical space as an “inner” space. Bernhard Leitner’s work leads us to a quality of sound (as space) that remains concealed within stimulus streams. It shows the potentials of sensual experience that we are barely conscious of because they are either lost or have remained unknown as possibilities.

This exhibition addresses the question of the artistic invention of so-called sound sculpture. During the late 1960s in New York, Austrian architect and artist Bernhard Leitner designed the first sound-space sculpture or architecture – a multi-channel architecture of sound – prior to the advent of the technical possibilities required for its realization. The idea stemmed from Leitner’s interest in space (architecture), classical and modern music, modern dance and the spectrum of technologies at the disposal of twentieth-century art.

Conceived in close collaboration with Bernhard Leitner for the Hamburger Bahnhof – Museum für Gegenwart, the present exhibition assembles sketches, notations, models, photographs exclusively pertaining to this early field of experimentation whose scope was initially confined to the realm of theory. At the center of the exhibition in the White Cube is the revival of the first sound-space investigations realized between 1971 and 1973 with the aid of a manual crank-driven circular relay switch and a punchcard programming device. It is not a historical reconstruction, however, but rather a re-inception, on the basis of modern control systems, of the first sound-space-sculpture in the history of the visual arts.

Since 1968 Bernhard Leitner has been designing spaces with sound as material and carrying out theoretical and practical sound-space investigations. Since 1970 Leitner has been exhibiting his sound-space objects and sound-space sculptures in the international context. Leitner’s works have been shown at P.S.1 New York, Künstlerhaus Wien, ZKM Karlsruhe, Kunsthalle Bremen, at documenta 7 and the Donaueschingen Music Days among other key venues. In Berlin his works have been exhibited at the Akademie der Künste, the Klangkunstforum and at sonambiente 1996 and 2006. In 1984 he realized his first permanent public sound-space installation at the Technical University in Berlin. 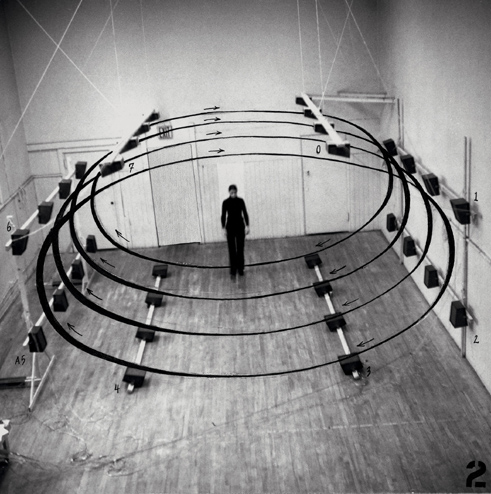