Her Noise – The Making Of
Authors: Electra with Emma Hedditch
Duration: 60 minutes, 2007

Her Noise was an exhibition which took place at South London Gallery in 2005 with satellite events at Tate Modern and Goethe-Institut, London. Her Noise gathered international artists who use sound to investigate social relations, inspire action or uncover hidden soundscapes. The exhibition included newly commissioned works by Kim Gordon & Jutta Koether, Hayley Newman, Kaffe Matthews, Christina Kubisch, Emma Hedditch and Marina Rosenfeld. A parallel ambition of the project was to investigate music and sound histories in relation to gender, and the curators set out to create a lasting resource in this area.

Throughout the development of the project, the curators conducted dozens of interviews, whilst also compiling sound recordings and printed materials which would eventually form the Her Noise Archive. The Her Noise Archive is a collection of over 60 videos, 300 audio recordings, 40 books and catalogues and 250 fanzines (approximately 150 different titles) compiled during the development of this project. The archive remains publicly accessible at the Electra office in central London.

Much of the material available in the archive was shot specifically for this project, and is uniquely available as part of this archive. The documentary ‘Her Noise – The Making Of’ was commissioned by Peacock Visual Arts, Aberdeen on the occasion of the ‘Sound’ festival and ‘SoundAsArt’ conference at University of Aberdeen.

The video documents the development of Her Noise between 2001 and 2005 and features interviews with artists including Diamanda Galas, Lydia Lunch, Kim Gordon, Jutta Koether, Peaches, Marina Rosenfeld, Kembra Pfhaler, Chicks On Speed, Else Marie Pade, Kaffe Matthews, Emma Hedditch, Christina Kubisch and the show’s curators, Lina Dzuverovic and Anne Hilde Neset. The documentary also features excerpts from live performances held during Her Noise by Kim Gordon, Jutta Koether and Jenny Hoyston (Erase Errata), Christina Carter, Heather Leigh Murray, Ana Da Silva (The Raincoats), Spider And The Webs, Partyline, Marina Rosenfeld’s ‘Emotional Orchestra’ at Tate Modern, and footage compiled for the ‘Men in Experimental Music’ video made during the development of the Her Noise project by the curators and Kim Gordon, featuring Thurston Moore and Jim O’Rourke. 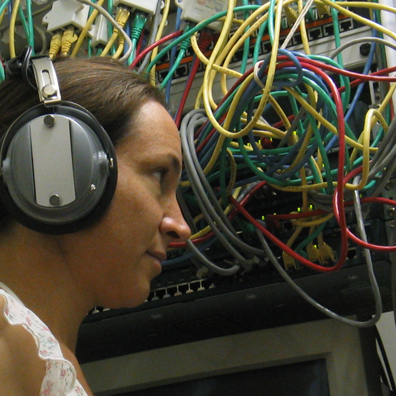